Understanding thermal issues is key to the proper selection of enclosures in order to ensure continued performance.

Overheating causes electrical insulation to deteriorate and shortens the life of electrical and electronic components. As a rule of thumb, for every 18°F (10°C) above room temperature (72°F or 22°C) an electronic device operates, its life expectancy is reduced by 50%

It is important to evaluate:

Polycarbonate enclosures, such as the Heartland series provided by AttaBox® Enclosures, provide superior insulation. The temperature performance range of polycarbonate is -40°C to 120°C (-40°F to 248°F). Conversely, metallic enclosures such as stainless steel absorb and conduct heat.

Polycarbonate enclosures actually dissipate heat better than unfinished aluminum or stainless steel enclosures because the surface is a more efficient thermal radiator than the unfinished surfaces. In outdoor applications, light-colored enclosures such as white have a high reflectance which minimizes solar heat gain compared to dark-colored enclosures.

Even though the thermal conductivity of a polymer is much less than aluminum or steel, the heat transfer characteristic of non-metallic and metal enclosures are similar.

Since air is a superior thermal insulator compared to either polymer or steel, it is a predominant factor in establishing heat dissipation. That helps explain why equipment operates at the same temperature regardless of which enclosure material is used and also why environmental control systems heat or cool the air to control the internal temperature.

In general, the finish and color of an enclosure most affect the heat transfer capability in both indoor and outdoor applications.

Another significant benefit of polycarbonate enclosures is the ease with which they can be modified, either at the factory or in the field using common installation tools. That enables polycarbonate enclosure users to easily, and at low cost, use additional cooling methods such as vents and fans designed to remove heat from the enclosure by optimizing natural air circulation. 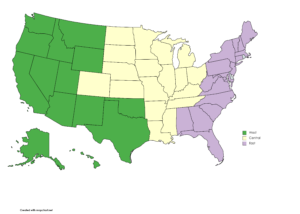